Rob Gray aka the GRAYnomad released an updated color pinout of the Arduino Due. 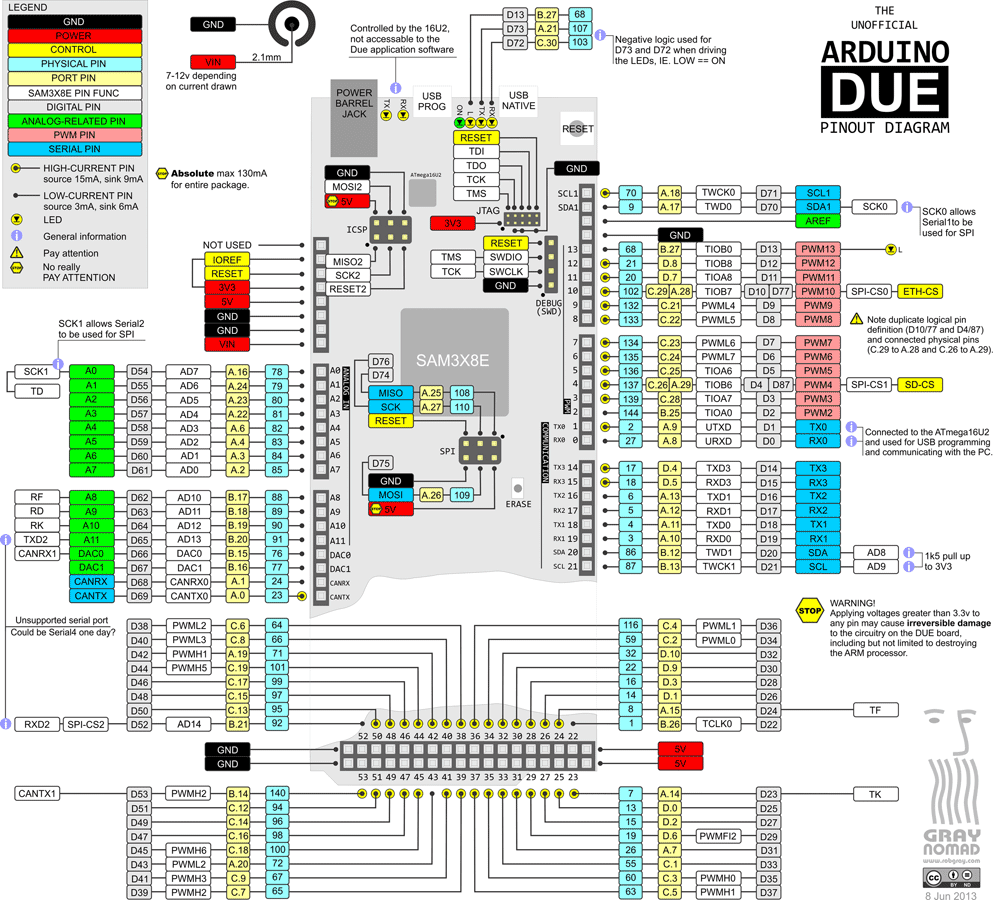 Go to the Arduino forum to get copies in various formats.

I had informed Rob of a minor issue, possibly others had too.  This version would appear perfect.  Rob is the original diagram creator with Alberto "Pighixxx" running with the concept to extend the diagram count to most other Arduino platforms and many other circuits.

Personal rant: I still consider the Due a beta/experimental platform.  The software support is no where near what it needs to be to be up to the level of the Uno, Mega, Teensy, and other platforms.  The software errata is also rather high and the development environment is not well polished.  If this chip represents a new plateau in the Arduino, the effort must be made to fully bake it, then let the community put the frosting on.  Going half way then releasing to the community has caused a fair amount of problems and slowed adoption considerably.  My rule of thumb - if Adafruit has not supported the ecosystem in some way, the system may be more of a pain than it should be.  That may be simplistic but Limor Fried is a saavy engineer and businesswoman so her opinions go a long way in hobby design.

Shields: It would be very good to get some reference shields out that detect the IOREF voltage and adjust accordingly (3.3 volt or 5 volt).  I do not count the wifi shield, it is too complex to be used as a reference for designers to build shields with I/O voltage adjustment capability.  And the GSM shield is also very complex and does not have official Due compatibility (possibly due to software issues).

Current ecosystem: With the release of the Beaglebone Black at the $45 mark, the pressure is back up.  The old Beaglebone was a bit expensive to challenge the Arduino clan.  But the BB Black has a great deal of capability and undercuts the Due by $5.  The lower-end Arduino clones like the Teensy 3.0 use ARM Cortex chips at Uno like prices (~$25-$30) often with extended software support out of the gate (see Kickstarter).  The choices are harder (or better) than ever.
Posted by Anne Barela at 10:17 AM