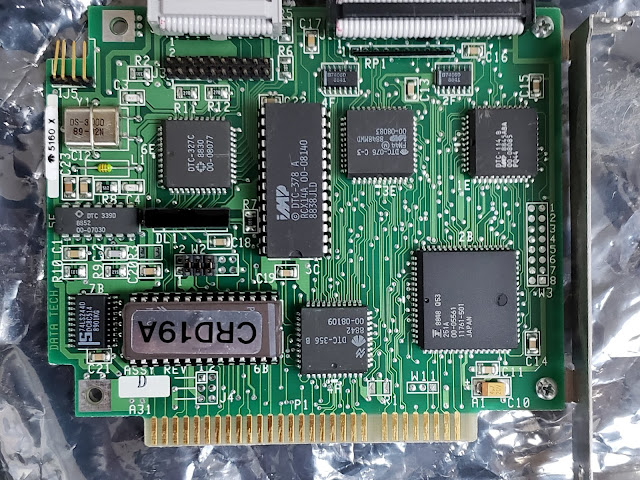 Here is the controller card supporting a half-sized hard drive. I haven't gotten down to the hard drive label but I have a suspicion it's an RLL 30MB unit (given RLL added 50% to a 20MB drive). Let's look at the card controlling it:

There is an installation guide on minuszerodegrees.net! It doesn't say what Rev D is but for Rev C,  10-05-88, BIOS address jumpers so this must post-date 10/1988 meaning this was a later add-on and this is supported by the fact I was given the original full height floppy where the half-height hard drive and floppy now live.

With a google we have stason.org's documentation:

And the diagram is similar to below except W3 (1 position) is an unpopulated 8 position in my board: 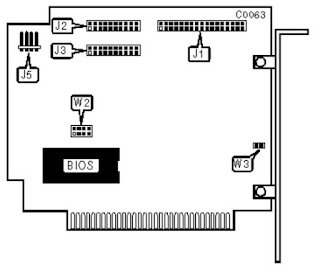 So let's go to the card:

Connectors: J1 and J2 have cables for a drive 0 (C: in DOS). J2 is empty as there is only one drive. The drive activity header J5 is unconnected, the install guide says this is for AT hard drives. And there is no further information on connecting to that header.


The types of drives supported is hard coded into the card BIOS. Fortunately later BIOSes had a free form type. Here is the table from the install guide: 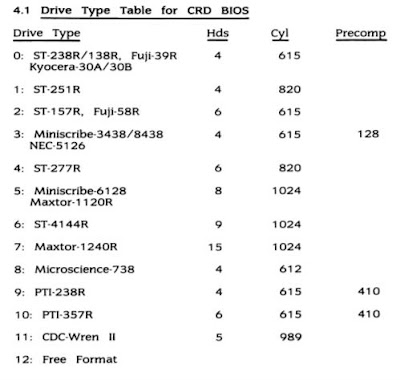 I'll backfill what type of hard drive is found.

The BIOS chip agrees with the documentation as a 5160X, having a CRD prefix. This would be BIOS rev 19A.

The board rev is D but the value doesn't match CXD23A. It may be a rev C BIOS.


This controller has a built-in, low-level format program. To enter the program run the DEBUG utility supplied with DOS and at the prompt enter: G=C800:5.

Which is helpful as if the drive needs to be initialize, that information is needed.

Early 1983, some significant events occurred.  The IBM 5160 (IBM XT) and DOS 2.0 were released, and they supported hard drives.  The BIOS on the 5160 motherboard introduced support for BIOS expansion ROMs, and so now it was possible for a hard drive controller card to have its supporting BIOS located within a ROM on the card.
About this time is when a new revision of motherboard BIOS appeared for the IBM 5150, the 10/27/82 revision, and it too had support for BIOS expansion ROMs.
So at this time, someone with a 10/27/82 BIOS equipped IBM 5150 could fit an XT-class hard disk controller, a hard drive, and run DOS 2 - all that would need to be worried about was whether or not the 5150's 63W power supply was going to be adequate for the task.  But at the time, it was not adequate (due to the power requirements of current hard drives).  It is the reason why IBM put a 130W power supply in the 5160.  The diagram at here shows that the +12V start-up power requirement of the Seagate ST-412 easily exceeds the +12V power rating (24W) of the 5150's 63W power supply.
At this time is when IBM offered a hard drive solution for the IBM 5150.  It was the attachment of an IBM 5161 expansion unit (one that contained a hard drive and controller) to the 5150.
POST 1983
Hard drives became physically smaller, and their power requirements smaller.  Therefore, the 5150's 63W power supply becomes less of an issue.  For example, it is reported that a Seagate ST-225 works okay with the 63W power supply.


It appears the PC has a replacement 125 watt power supply, still uncertain though. I would think the vintage is older than 10/1982 so it should have a compatible BIOS and work with DOS 2 or higher. Having seen this PC in operation under DOS 4, things seem ok.

I still need to determine the BIOS date, I'll need to reassemble and reboot I think. The chips I believe are the BIOS have a big 17 on them and a smaller 20.


Having a hard drive was a BIG THING in the 1980s, at least for a home computer. It was a popular add-on for PC owners looking at their AT-owning friends. I myself got a 30MB RLL drive for my Compaq DeskPro as an add-on, like this computer. Boot times improved and oh, the storage, no floppy swapping. Who could ever fill a 30MB drive? There were no MP3s, videos, etc.