Continuing my blog series on the IBM PC 5150 I bought off Craigslist, we come to the third expansion card in the unit, a "full-length" multifunction expansion card.

Multi cards were important for a number of reasons:

In theory, an individual card could be used for each function, but with only 5 expansion slots, it would be impractical - relaying on the expensive expansion case that no one ever got.

Thus, multifunction cards came out and the king of the hill in this sector was AST Research, Inc. of Irvine, California. They had success with IBM add-in cards, especially expansion cards providing multiple functions on one card.

This card was typical of a usually expensive purchase: the AST SixPackPlus. This card can provide the following functions:
Fortunately, the manual for this card is still available online here dated June 1983. Here is the layout from the manual: 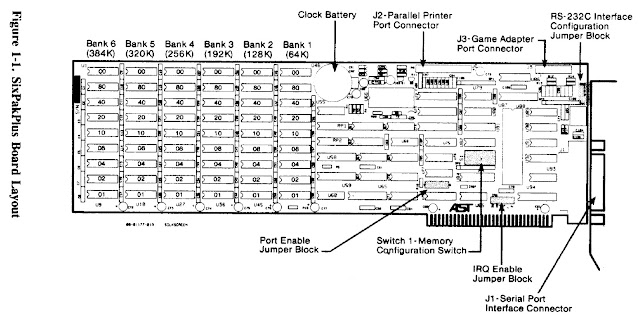 On the side of my card it says the board is a Revision J which differs from the manual (probably Revision A). The main thing is the battery holder is at the bottom of the card and not at the top like in the diagram.

This card is fully loaded with memory, with Banks 2-6 containing 9 NEC D4164C 15 ns RAM chips each. In this card, Bank 1 contains 9 TI  TMS4164-15NLJ chips, code GBY (triangle) 614 09. Both of these brands are different from the motherboard RAM which likely suggests the card perhaps came with Bank 1 populated or it was the first Bank purchased and the other memory purchased later. Further inspection finds Banks 2 & 3 have the code 8604RY008 and Banks 4-6 have the code 8516RU708. So the date of installation on the RAM banks is most likely:
RAM wasn't inexpensive at the time so upgrading piecemeal was expected, as long as it was 9 chips at a time (8 bits plus one parity bit).

The original owner had not used the Parallel Port (using the single function card previously reviewed). The Game Adapter was hanging out the back precariously.

Having booted the PC, I was aware the RTC was not functioning. All too common that the 3V battery was depleted. Finding a replacement BR2325 has been hard, it wasn't even at Batteries and Bulbs. That battery is a bit bigger in diameter than the more typical CR2032 which I may try in a pinch before mail-ordering a replacement as the contacts are strips in the center instead of having anything on the edges. See below. 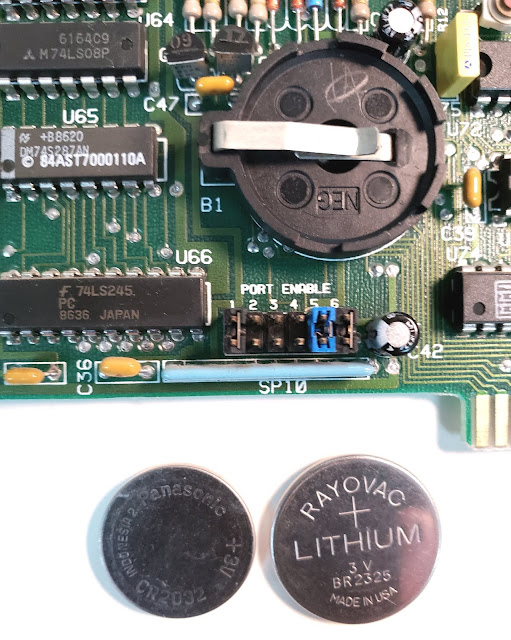 There are port enable jumpers at the bottom of the card near the ISA slot interface in the above picture. The definition of the port jumpers are (by reading fragments of the manual):

If an IBM Monochrome Display Adapter is present, Port 3 shifts to LPT2 and Port 4 to LPT3

So for this card, the COM port is enabled as COM1, the Game Port is active and the RTC is enabled. The parallel printer port is disabled and that aligns with the port not being used when the PC was purchased. Thankfully I have the original cable in the "bag o' parts" I received. If there an expansion card bracket with a DB25 cutout for the parallel port, I did not receive it but I probably have a spare in my parts.

I'll go through the switches per the manual. Switch positions 1-3: Memory 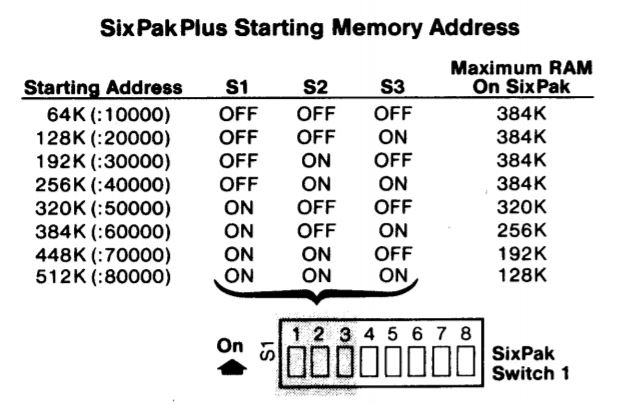 My switches are OFF ON ON, starting the memory at 256K. This aligns with the 384K onboard and the 256K on the motherboard. All good. Now Switch Positions 4-6: 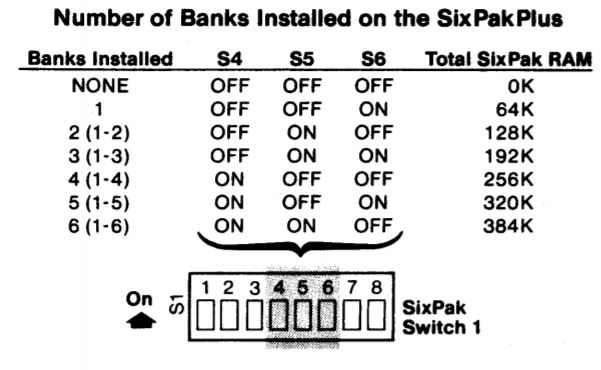 The 5150 has switches set for ON ON OFF, for 6 banks, which is exactly what is populated on the board. All good. Switch Position 8: 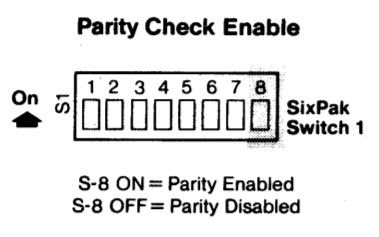 On this PC, switch 8 is ON so parity is used.

I don't see any setting in the manual for Switch Position 7. It is OFF on this PC's card.

I've beat this cards features to death. Next will come the floppy controller card.
Posted by Anne Barela at 9:52 PM