New Series of Posts - Documenting an IBM PC 5150 from Craigslist 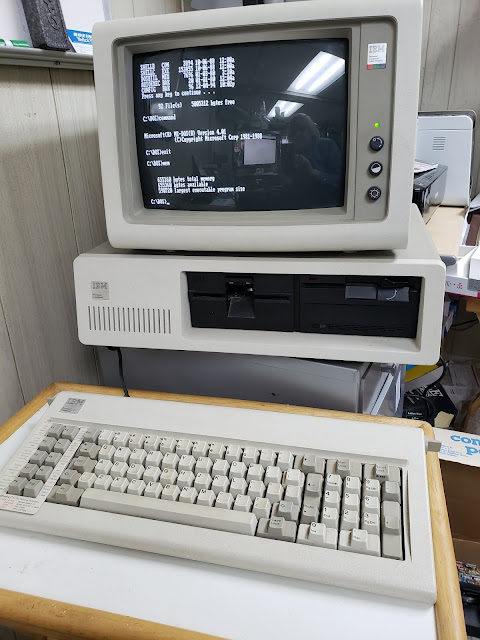 I've been involved in PC-compatible computing since college. Let's just say the IBM PC had been out for 3 years and the Compaq portable was available for checkout by the college to do work. My father-in-law was also into computing early and had bought an IBM PC himself. We ended up buying a Compaq DeskPro (1/original, XT class) in late 1985 or so (and we still have it, in storage).

With many MS-DOS disks, I really wanted to work on imaging things while they are still viable. And, perhaps, have some vintage fun myself. So when an IBM PC came up on Craigslist, I snapped it up for $180. I didn't know what all I was buying but it worked and I saw it had a hard drive and some other additions while picking it up (yes!).

So I have it home and it's time to start to see what I have bought.

Initial inspection from the outside:

The system came with:

Definitely the system should boot from hard drive. And the boot process is painfully slow as this machine has a full 640K of RAM and the processor must test it all.

The hard disk has MS-DOS 4.01 on it. Some of the floppy disks that came with it have PC-DOS 2.01 and MS-DOS 6.2. Do not mix using command.com from a floppy with the DOS on the hard drive, the system will hang.

Both installed floppy drives work. The memory appears to be all registering.

The hard drive, as seen at the home I bought the unit from, has some software on the hard drive:
There appears to be no disks or documentation for WordPerfect, dBASE, 1-2-3, or AST. There is no official DOS media. There are some floppies included with games.

Next Post: I dive into the inside of the system unit to see what all is there.
Posted by Anne Barela at 12:12 PM