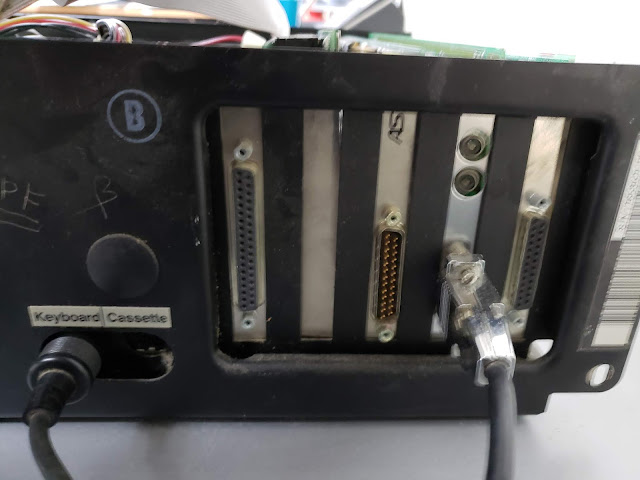 Looking on the back, I could tell the machine had a decent number of expansion cards in it. That was good. There appear to be scratches on the back, a letter beta and initials JPF (I believe the initials of the original owner I bought it from).

Doing some research, I found information on the minuszerodegrees.net site about early IBM PCs. That website is a treasure trove of info on early IBM hardware and knowledge. Bookmark it.

By the picture above, it is a 5150 PC-2 or 'model B'. That's ok, this machine was not purchased to be an example of an early production PC.

Both have two large DIN connector receptacles on the back, one for a keyboard, one for a cassette interface for ROM IBM Cassette BASIC.

Ok, let's pop the hood. First off, we determine if it is a 64K motherboard or a 64K to 256K motherboard. a peak on the right side shows the latter:

There is dust in the case also. Ok, this type of motherboard could hold a maximum 256K of memory. Meaning we have one card with expansion memory to get to the 640K the machine displayed earlier on boot and check.

Ok, here is the machine with the case removed: 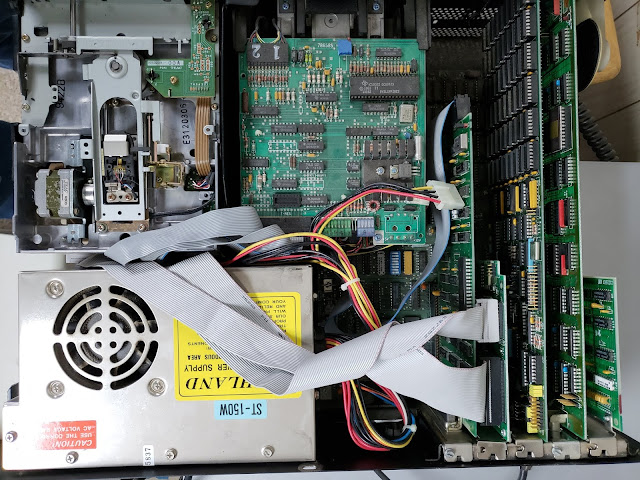 Yes, all five ISA card expansion slots filled, this is good, lots of hardware in this buy and more functionality. That power supply doesn't look IBM, I'll have to check that later (and it's noisy too but not in a "bad components" way.

There was an extra expansion bay bracket connected, bent and sticking out. And a cable sticking out of the case also. This turned out to be a joystick interface and bracket. Apparently gaming must have been done on this but an early PC didn't have extra bracket or knockout space for the connector. 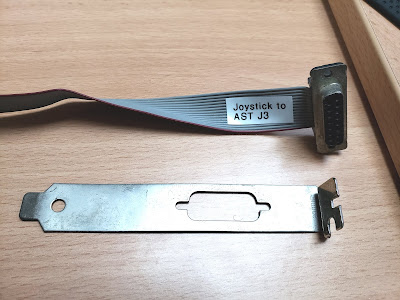 So I labeled the connector and straightened the bent bracket and set them aside for now. I have a vintage flightstick style game controller for IBM PCs I can use with it.

Ok, next time we'll look at the CPU/GPU area and mafter that start the ISA card inventory.
Posted by Anne Barela at 3:27 PM