Microsoft and Liebherr announced yesterday they are collaborating on a new "SmartDeviceBox" that allows the kitchen appliance to remind people what they need at the market, Microsoft principal data scientist TJ Hazen said in a blog post.

Fir now, let's not make jokes about your refrigerators updating at bad times or having blue screen of death episodes.

Rather, let's connect this announcement with an article that was published by former Apple executive Jean-Louis Gassée (link here). Most Internet of Things watchers are very skeptical right now. With some companies discontinuing the services behind their products and support often horrible, the consumer space has been very mixed. And some of the ideas are just not well thought out. 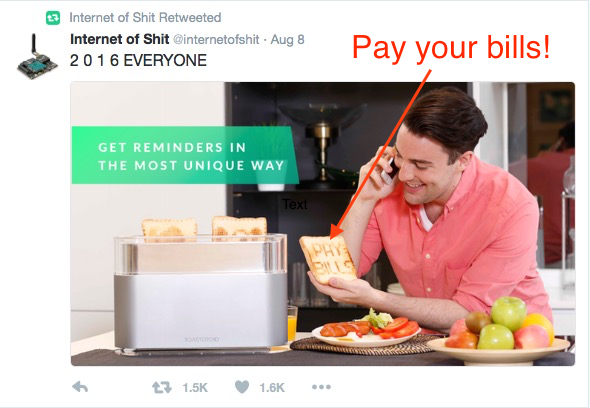 Gassée states 'The IoT randomly works. Devices stop and restart, they require visits to unsupportive customer support pages and helpless Your Call Is Important To U.S. help lines (and now we have chatbots). If you think I exaggerate, google “Nest trouble” or “smart bulbs trouble”.... Companies buy the cheapest possible processor, grab some software from the open source shelves, throw on a skimpy UI, hastily assemble and test, ship it.' Then he states "After a device has made it to the market, the real fun begins. Software updates are a problem when your connected lock or your connected car is in the middle of an update and you need to get in the house or drive to the emergency room."

If you look at my favorite vantage point, security, on that topic Gassée writes "Then there’s the truly ugly side of Consumer IoT: security, or the lack of it. The lackadaisical, to be polite, approach to software leaves many connections open to hackers who can see passwords exchanged in clear text on home WiFi while they sit in a car parked outside the house. Or we see that 100M Volkswagen cars are open to wireless hacking."

Then let's look at standards.

On Twitter, Alasdair Allan (@aallan) states: The #iot has 3 problems; security, refresh cycle, and standards. Of these standards least important, but only one the Valley cares about.

Companies don't often want cross-company standards. The classic "if we build our own ecosystem, we can keep people buying only our products" (examples: Nest, Apple).

Getting back to Microsoft. They are jumping on refrigerators and cars and what not. But this is the perfect opportunity for Microsoft or whomever to be a pivotal group in spurring the Internet of Things. How? Make it easier for people. Connecting IoT devices to the home and talking to each other is currently hard. Microsoft knows this space, they can make it easier for us. Take Windows 10 IoT and double the staff and tie them into your research group.  Make It Simple is the goal.

I never want to have to reboot my GE smart bulb, certainly not having to do this manually, that is not asking too much. If Microsoft got IoT basics right, it wouldn't matter if company X did a great Kickstarter, then 2 years later went out of business - if we had common basis, things would still work in a standard way which communicates in a way that is easy to use (thanks to Microsoft or whomever heeds this).

A starting point. Integrate the DynDNS type service in. Microsoft did it for Windows Home Server, they know how.  Bake it in. Keep building in the simple, positive steps.

We didn't go to the moon on the first launch. Microsoft and others, ensure you build a standards compliant base which includes security and intercompatibility, for IoT to grow on.