During his October 3rd presentation at Maker Faire Rome, Massimo Banzi gave a preview of a new collaboration and a new board: Adafruit Gemma becomes officially Arduino Gemma, a tiny but powerful wearable microcontroller board in a 27mm diameter package. 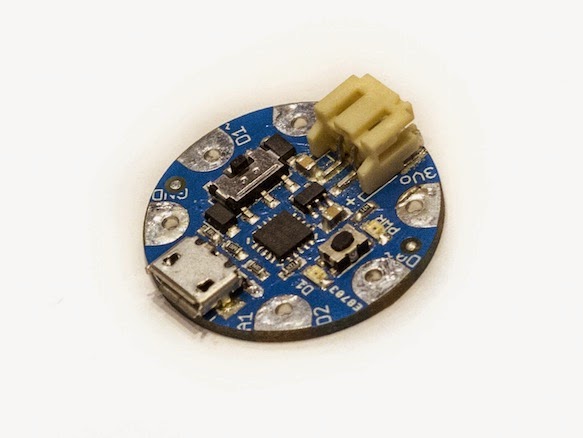 Powered by an Attiny85 and programmable with the Arduino IDE over USB, anyone will be able to easily create wearable projects with all the advantages of being part of the Arduino family. The board will be default-supported in the Arduino IDE, equipped with an on/off switch and a microUSB connector. 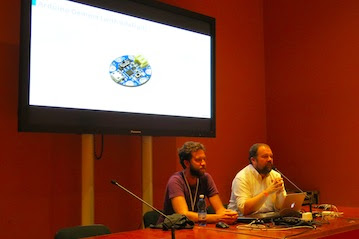 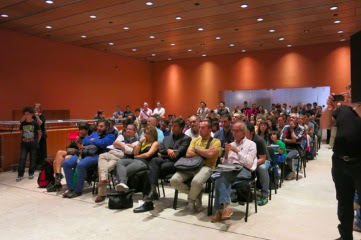 The Attiny85 is a great processor because despite being so small, it has 8K of flash and 5 I/O pins, including analog inputs and PWM ‘analog’ outputs. It was designed with a USB bootloader so you can plug it into any computer and reprogram it over a USB port (it uses 2 of the 5 I/O pins, leaving you with 3). Ideal for small & simple projects sewn with conductive thread, the Arduino Gemma fits the needs of most of entry-level wearable creations including reading sensors and driving addressable LED pixels.
After the fruitful joint effort developing Arduino Micro, once more the Arduino Gemma has been developed in collaboration with Adafruit Industries, one of the main leaders of the Maker movement. Technical specifications:
Microcontroller: ATtiny85
Operating Voltage: 3.3V
Input Voltage (recommended): 4-16V via battery port
Input Voltage (limits): 3-18V
Digital I/O Pins: 3
PWM Channels: 2
Analog Input Channels: 1
DC Current per I/O Pin: 40 mA
DC Current for 3.3V Pin: 150 mA
Flash Memory: 8 KB (ATtiny85) of which 2.5 KB used by bootloader
SRAM: 0.5 KB (ATtiny85)
EEPROM: 0.5 KB (ATtiny85)
Clock Speed: 8 MHz
MicroUSB for USB Bootloader
JST 2-PH for external battery
Wow, major announcement.  Default support for the ATtiny85 on Gemma would be a big help, to include Adafruit Trinket (the original, not Pro).

What will Arduino do next?
Posted by Anne Barela at 7:48 AM