Microcenter continues to feature a loss leader in do-it-yourself electronics.  Starting Monday 4/29 for the next two weeks they feature the Digispark tiny Arduino-type controller for $5.99. 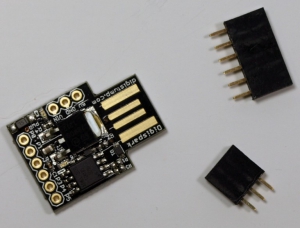 This board was originally offered on Kickstarter at $10-$12.  Their pitch:


We set out to build a little brother to the wonderful Arduino line of development boards - we were tired of leaving our valuable Arduino's behind in projects, or worse, ripping apart old projects to build new ones! We also felt the Arduino was too big and powerful for many projects where we only needed a few pins, or an SPI or I2C bus. And so the Digispark was born! To us, the best things about the Arduino is the community, the easy of use, and the IDE - by making the Digispark an Arduino compatible development board all of those remain common. Plug it in, power your project with USB or external sources, program it with the Arduino IDE, and easily use existing Arduino code! But with its small size and low cost you can feel free to leave it in your project, give one to a friend, and use them everywhere!

The current direct price from Digistump is $8.95.

The Digispark has been offered by Microcenter at the $10 level but now, as a loss leader, they are advertising it for the next two weeks at $5.99.  They also have a good selection of companion and expansion boards.  Please check the website for availability both online and in stores.

If you would like some ideas on how to use Digispark and interfacing to other circuits, see the extensive wiki at http://digistump.com/wiki/.

If you need some microcontroller power in a small, affordable package, this may be the ticket for you.