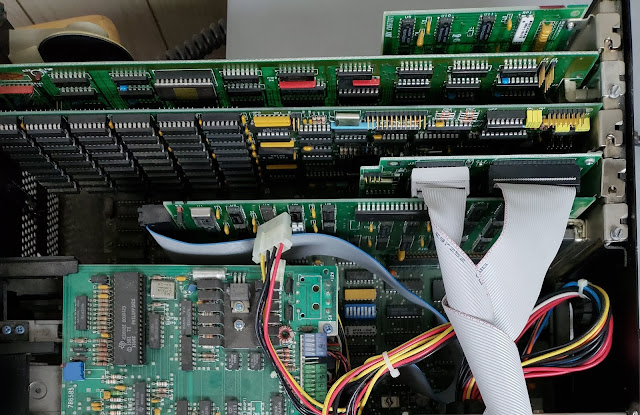 Continuing to explore an IBM PC 5150 I got on Craigslist, we've already had surprises. One was that all 5 card slots were filled with hardware (and not just knockouts or a port on a bracket).

I'll start easy. The one at the top of this picture is a now out. Photos: 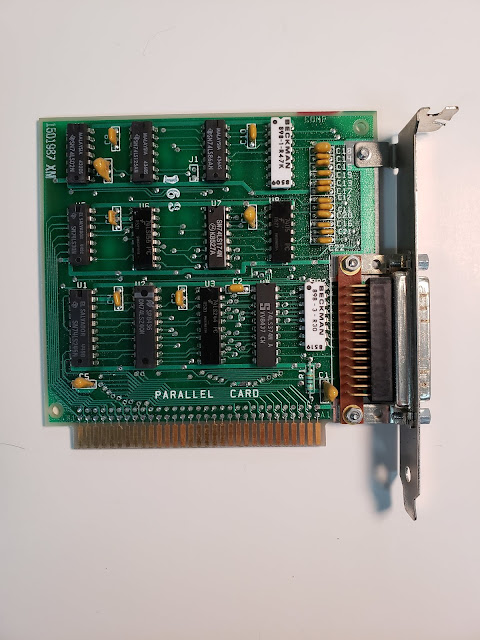 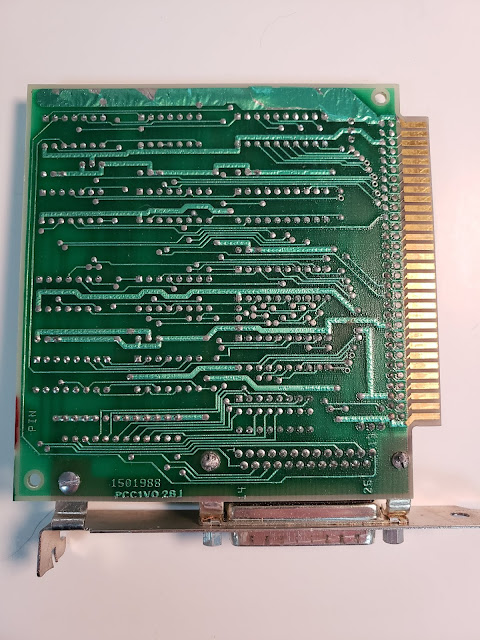 This is not an official IBM card. An example of the more generic add-ons available after a few years for PCs because early on there were only a few cards and they came from known sources.

It's easy to deduce this is a parallel port card (as it says on the chip side. Parallel, or printer ports, are characterized by a female DB25 connector for PC. One typically had a multiconductor cable with one end having a male DB25 and the other some sort of configuration but most likely a Centronics connector.

More info is on Wikipedia (of course):

There are many types of parallel ports, but the term has become most closely associated with the printer port or Centronics port found on most personal computers from the 1970s through the 2000s. It was an industry de facto standard for many years, and was finally standardized as IEEE 1284 in the late 1990s, which defined the Enhanced Parallel Port (EPP) and Extended Capability Port (ECP) bi-directional versions. Today, the parallel port interface is virtually non-existent because of the rise of Universal Serial Bus (USB) devices, along with network printing using Ethernet and Wi-Fi connected printers.
The parallel port interface was originally known as the Parallel Printer Adapter on IBM PC-compatible computers. It was primarily designed to operate printers that used IBM's eight-bit extended ASCII character set to print text, but could also be used to adapt other peripherals. Graphical printers, along with a host of other devices, have been designed to communicate with the system.

That article has the pinout and the history. The original IBM PC printer was a rebranded Epson dot matrix, a decent printer manufacturer at the time and affordable.

And the DB25 connector was relatively inexpensive and smaller than a Centronics connector.

This card has 74LS logic except one 7405 package. The two white packages are most likely resistors in an IC package. There is no "controller chip" or ROM, the host PC was expected to do the buffering and protocol work.

Google was no help as to the manufacturer. The cards are available on eBay, around $35-$56 which was surprising.

There is another card in the PC (I emphasize add-in card, there are no parallel or serial ports on the IBM PC 5150 motherboard) has a parallel port.

One thing to note: there are NO jumpers to set the port (LPT1 vs. LPT2) addresses, interrupts, or other settings. I'll have to check whether this is hardcoded for LPT1 or LPT2.

Why was an add-on card used and the other port not? A mystery.