I have a soft spot for MS-DOS, as it was the first PC operating system I used. It started in 1984 with Compaq luggable computers available for loan at Caltech and at JPL when I worked there over the summer of '84. I don't ever recall using IBM's version, PC-DOS, as I never recall using IBM hardware. But thanks to using 100% IBM compatibles rather than offshoots like Tandy computers, it really didn't matter.

The first PC we bought, one of our first large purchases as a couple, was the first Compaq Deskpro (Model 1, 8086), Compaq's first foray into desktops after the success of the Compaq portable.

So I have a soft spot for DOS computing.

I've wanted to put DOS on small, modern hardware for awhile. My first project is using the Raspberry Pi 3.

I have a RasPi mounted to the official Raspberry Pi display.
The only hardware you need to add is a keyboard (a mouse helps for setup). I have a couple of wired keyboards with built-in trackpads. Any USB keyboard that the Pi will recognize will do.

There are many Raspberry Pi tutorials on loading Dosbox, the MS-DOS emulator for Raspberry Pi. This one at PiMyLifeUp appears to be just fine, I think I followed a different one but they are very similar.

I set Dosbox to use the directory dos under /home/pi as my MS-DOS disk. I mapped this to drive C:\

I added a link to the graphical interface under games.

How to get the files from my PC to the Pi? There are many ways to do this, some more painful than others.

I used this guide at Raspberry Pi HQ to use SAMBA to map my DOS directory as a network shareable location. This guide may also help.

I said public=yes which means anyone can access my Pi but I suggest you have the login. My SAMBA setup allows access to the entire /home/pi directory - you might want to just map the dos directory for more security.

In Windows file explorer, in the location bar type \\raspberrypi\pi and you should see your files. Note that you'll have to enter a password if you configured it.

Copy over your games. Our favorite is Rogue, redone for PC from the DEC VAX et al. sources. Wikipedia. You can play it in-browser here to try it out via Internet Archive (it's some sort of hacked copy there though). You can see it being played by someone in this Youtube video.

Rogue is in color and is ASCII graphics like alot of early text games and programs. I think our copy was ported from Unix and not a copy of the Epyx release, Techers did a lot of porting to MS-DOS from Unix back then.

I still had the original files from the '80s to I copied them over to the Pi and they appear in a subdirectory in Dosbox. And it runs like a champ! 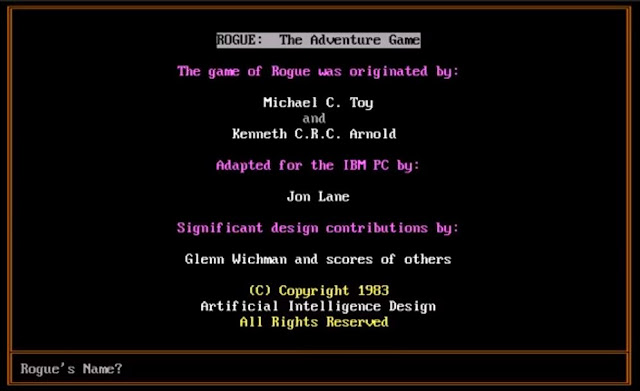 If you are looking for MS-DOS Games/software, you can Google around. One site I found is abandonia.com which looks good. In all their software, they have Rogue also if you want it.

Hopefully this has given you some ideas for how to set up your own MS-DOS emulator. If you think I skipped steps or it is unclear, there are other sites that may have better step by step.

I hope to run a real 8088 code emulator on hardware soon. It all depends on time.