In the Windows 10 Era: Microsoft Wins, Intel and AMD Vie for Scraps

For the last 25 years, there has been a dominance in the computer industry: WINTEL, a nickname for the Microsoft & Intel dominance.  It has varied over the years - AMD rose up to challenge Intel, Microsoft has had challenges including government charges and Apple. 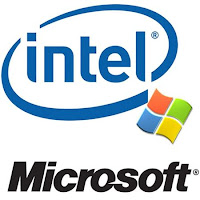 How did they do it: Microsoft built Windows versions which used more system resources.  Intel would build processors (and chipsets, and other items) that would be more powerful to meet Windows' demands.  With special catering to business and enthusiasts, this teaming provided growth and revenue for both companies year after year.  Governments investigated various times when dominance was against consumer rights but generally the progress was steady.

The entire mountain is now in collapse.  Let's look at things:

After the failure that was Windows Vista, corporate clients have stuck with Windows XP basically until the bitter end.  This has reduced Microsoft's income from sales of operating systems.  Windows 7 has been adopted by many but corporations have trimmed IT budgets to the point where what IT staff have been left have not wanted to move their constituency off XP and Windows Server 2003.  This late switching costs Microsoft revenue.

Microsoft has also attacked windmills left and right - Lotus, dBase, Wordperfect, Google, Apple, many more over the years - whenever they foresaw a threat, they would try to outdo the threat through skill or maneuvering, always using up valuable resources (usually to little end for the consumers).

Most shops shifting off Windows XP have chosen Windows 7, lowering revenue and compatibility of the current Windows 8 frontline system.

The confluence of several issues:
1) With the lag in software sales, the amount of new hardware being purchase has slowed, with chip sales in a huge slump.
2) The tablet market slowed sales of traditional desktop and laptops significantly.  Intel has been late to the low power mobile space with cool, efficient, powerful chips.

Intel has hoped to keep the high end computing market going, especially as new servers are required.  But Intel has had problems with their 14nm chip fabrication, needed to reduce chip power and size (size = more chips per wafer, making more money).  Intel's process tick-tock release schedule (improvements, then shrink in size, then more improvements, etc., is seriously stalled with newer chips not on a new process or with significant hardware improvements.  Some say the hardware improvements have actually been stagnant since 2011.  Intel's withheld 6 core and higher core chips from affordable consumers.

With Steve Ballmer gone, Microsoft's new CEO is trying to save the company in the face of the above scenario coupled with threats from Apple and cloud computing.  Windows 10 upgrades for many for free will be a huge boon to capturing customers.  And Windows 10 can run on some hardware that is 8 to 10 years old, breathing life into hardware already paid for.

Few people will now be buying many new Intel (or AMD) chips just to run Windows 10 like they might have for new versions of Windows in the past.  Why when it runs well on current and past hardware?    Intel and AMD stock has tanked and Intel has lost some key management.

The key is to watch what companies may do - stay on Windows 7 until end of life or adopt Windows 10.  Microsoft must include features in the OS worth upgrading to - both for home and office users.  Do not do it through past trickery, but do it through winning over customers with superior product & service.  Focus on your core and that's what they've done this month.

Intel must cut hardware costs.  They have a very high margin for current chips.  If new fabrication plants will be spun up slower, funnel the money into cheaper chips, fueling savings and making stock holders see Intel is not down & out.  Also allow for cheaper 6 core chips (about $350) and 8 core chips ($499).  They are in your servers, allow them on the desktop.

If Intel cannot move hardware down a bit, then perhaps AMD can move in in the budget space.  But they'd better look to advertise how well their chips run Windows 10.

Where do you see the market?