I Learned About Technology's Future From Jonny Quest

Like many kids growing up in the late 60's and 70's, Saturday mornings were spent watching cartoons.  Not much learning except Schoolhouse Rock, it was full of Hanna Barbera cartoons like Scooby Doo and Jonny Quest. Jonny Quest had the best story line - kids would be around their scientific dad and his action bodyguard.

The thing is: alot of cool technology was presented, fueling many kids to become engineers and scientists.

So in the vein if "all I learned I got from...", here is a list of Jonny Quest technologies and what we have today:

The Robot Spy was a spider-like robot with an electric eye.  Today we have hexapod robots with sensors.  While the sizes are different, we're on our way to achieving this one.

The laser was just a lab experiment years ago but on Jonny Quest the laser was already a weapon.  Today's article is the US Navy will make 2013 the year of the laser gun.

While the Quest jet is not ubiquitous today, the vertical takeoff and landing is in several planes today. 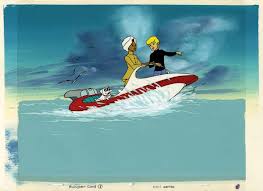 While we don't have personal jet packs yet, would you trust people to have them?  They can be seen at fair grounds and on the Six Million Dollar Man but this one wasn't to be commonplace.


I won't go into the case of the invisible electricity monster - I fear creating that every time I look through the Sparkfun parts list.
Posted by Anne Barela at 9:23 PM