Ok, so I am not releasing an LCD for the Arduino Esplora myself.  But in my documentation of the Esplora expansion header (here), I started to notice something from the schematic. 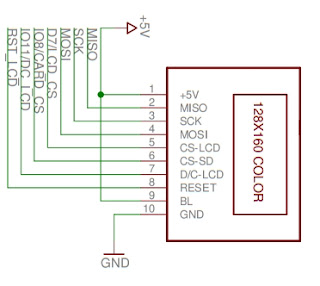 There is no information on the "future display option" other than the released schematic, the press release, and the device info page. The schematic states a 128x160 color display.  The device info states the connector is for "TFT display connector connector for an optional color LCD screen, SD card, or other devices that use the SPI protocol."  It also has the "CD_CS" / "CS-SD" line which seems to confirm a SD card option.

Ok, now where have I seen this . . . browsing the Adafruit displays, I find what I was looking for.  The Adafruit 1.8" display has the exact pinout, resolution, and a micro-SD card slot. 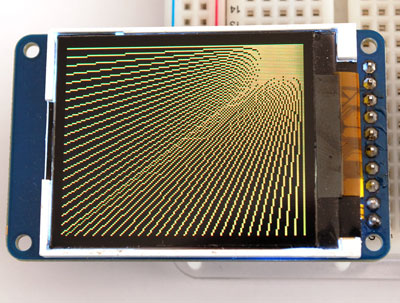 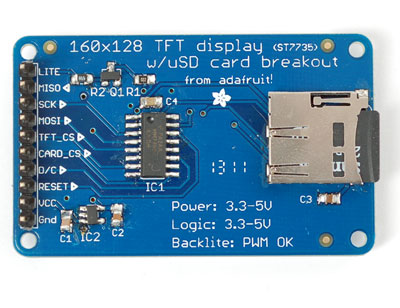 The display is very nice and there is a good library for both text and graphics.  It is not fast (the library could use some speed optimizations) but it is a "shaken out" piece of gear and code.  See the new Adafruit Learning Center tutorial for more information.  Note the tutorial uses an Arduino Uno and not an Esplora.

I note only one anomaly. The Adafruit display pins have pin 1 as a "Lite" backlight pin (which may be pulse-width modulated (PWM) for intensity) with pin 9 as the VCC power pin.  The Esplora schematic has pin 9 as the "BL" (backlight?) and pin1 as +5V.  As both these pins on Esplora are at 5 volts, it would work but the backlight is always on.

Would it not make sense to connect one of the PWM lines of the Esplora's Atmel microcontroller chip to the backlight to provide intensity control?  It would but all these lines are used for onboard items: the RGB LED, the buzzer, the "D13" yellow LED, and the two orange TinkerKit connectors on the top.  None are left for the backlight.

It could be that the Arduino team will release their own branded display.  But then again they could be working a combined effort with Adafruit (like their recent collaboration on the Arduino Micro).

I would say that the Adafruit display will not be the exact display sold for the Esplora - the SD Card slot would rub the left expansion header which is not connected to anything but should serve as a mounting point.  It would then be very likely that the unit to be released will be nearly identical but have the SD card on one of the long sides and the left edge have a 10 pin header to press into the connector providing a good mechanical fit (that is easily taken off if desired given the learning side of this device).

Last note - it is interesting that they decided on their own display rather than the TinkerKit LCD (as they have four TinkerKit connectors up top).  My take is cost as the TinkerKit version has it's own microprocessor, making it a more expensive option and adding bulk.

Follow-up: See my follow-up post on using the Adafruit display (yes it works!)
Posted by Anne Barela at 9:14 PM