Have your Pi AlaMode

My weekly perusal over a Seeed Studios, the Chinese open hardware shop, turned up a treat.  Wyolum has designed the AlaMode, a board that attached to the Raspberry Pi GPIO expansion pins to provide an Arduino-compatible microcontroller with some neat extras.  Being late to the game is the price I pay for not going up north to Maker Faire NYC. 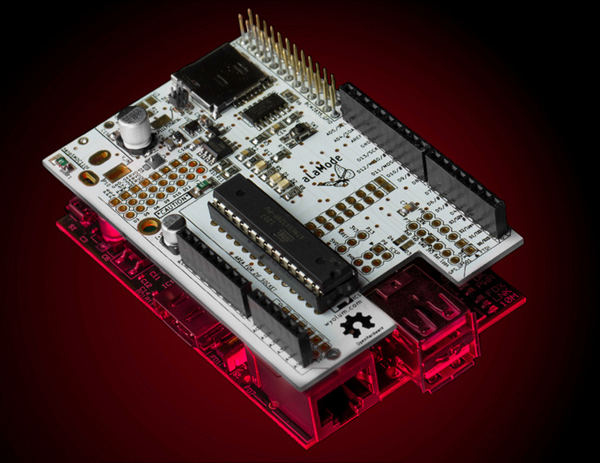 From the SeeedStudio site: AlaMode is an Arduino compatible development board that extends the Raspberry Pi. With Raspberry Pi ‘A la Mode, you can write a program on the Pi in any language you want, to control or monitor your Arduino application, making Internet integration and control easy. In addition you can program the AlaMode directly from the Pi. Or, turning things around, think of Raspberry Pi as a highly capable Ethernet and display shield for the AlaMode!

Check out the Bald Wisdom blog for a number of posts on using the AlaMode.  This includes their demo using the Adafruit motor shield to control a model train.

With the recent sellout and discontinuance of the Gertboard kit, this may be just what the Pi owner ordered.
Posted by Anne Barela at 5:03 PM