The Gertboard hardware expansion board for the Raspberry Pi is now shipping.  I received my Newark confirmation last week.  Besides many cool driver chips, it has an Arduino ATMega chip and all the breakout pins along one side.  In my opinion, I believe the Pi + Arduino is a good fit - expanded hardware and peace of mind that Linux will not interrupt real-time control at a crucial moment.

The one issue folks may have an issue with is Arduino shield (expansion board) compatibility. There are not "standard spaced" headers to place the pins so shields may be used by plugging them in.  More of a mechanical issue than compatibility really.  Clever people are wiring them up directly (an example Youtube video is here).  But I had an epiphany - use the Gertboard and the Kickstarter Breadboard Shield Adapter which adapts a shield header format to a pin inline format which can be mapped to the Gertboard easier. 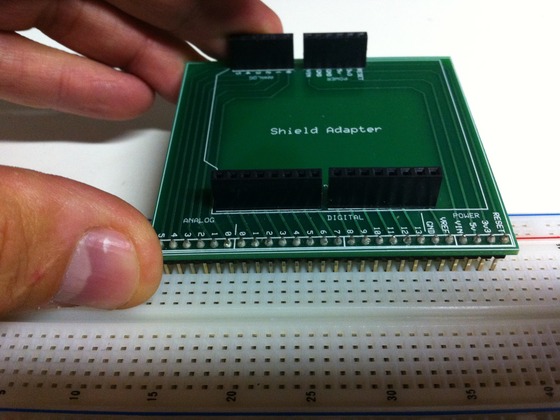 The adapter's inline pins would map well to the Gertboard below Gertboard ATMega pins on the left would map to the pins placed in the breadboard above.

Now it is only a matter of a few months until some cleaver person actually makes a direct adapter to plug shields into the Gertboard (you read it here first).  In the interim, I say buy a Breadboard Shield Adapter and then pat the pins yourself, either on a breadboard setup or a custom cable or just by wiring things yourself - it'll work much better than using individual jumper cables to to a test setup (that would not travel well).